Today we woke up and decided to go to South Maui to see the beaches there and snorkel. These beaches are suppose to be the best beaches on the island and have the #1 beach in the World. 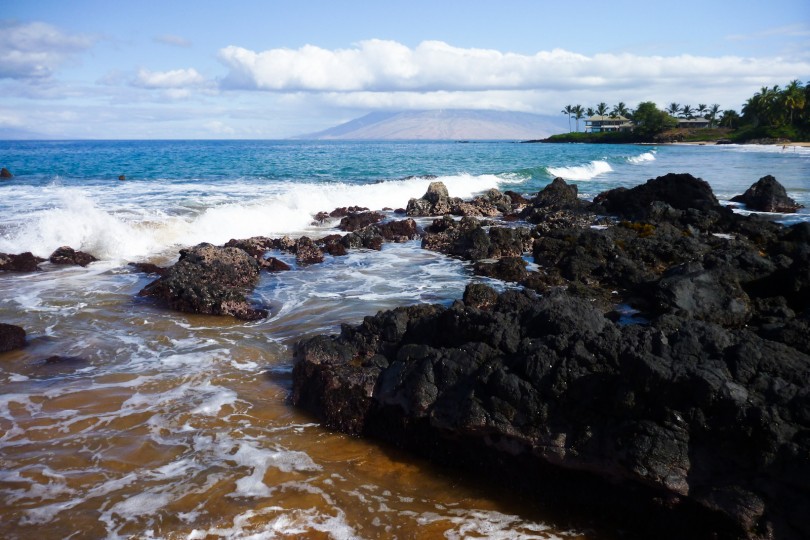 South Maui, one of my most favorite places! 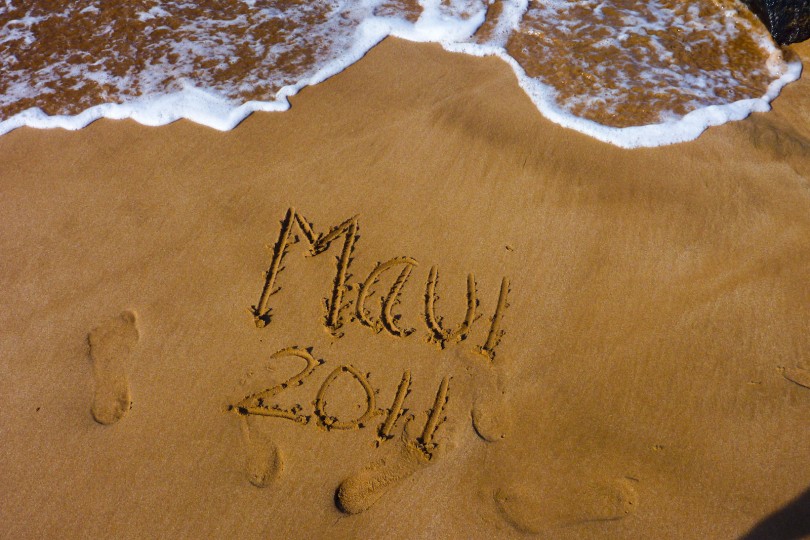 Our first stop was in the small and beautiful town of Makena. The houses that lined the beach were gorgeous. I was wondering where the big expensive homes were and we found them. Some of these houses were crazy! These beaches are known for their turtles. Brandon and I put on our snorkel gear and headed out. It was quite windy so we had to go out further for the sand not to be stirred up. We saw massive amounts of coral and beautiful fish. The coral was everywhere and just breath taking. We didn’t see any turtles so we went back to shore to relax on the beach. 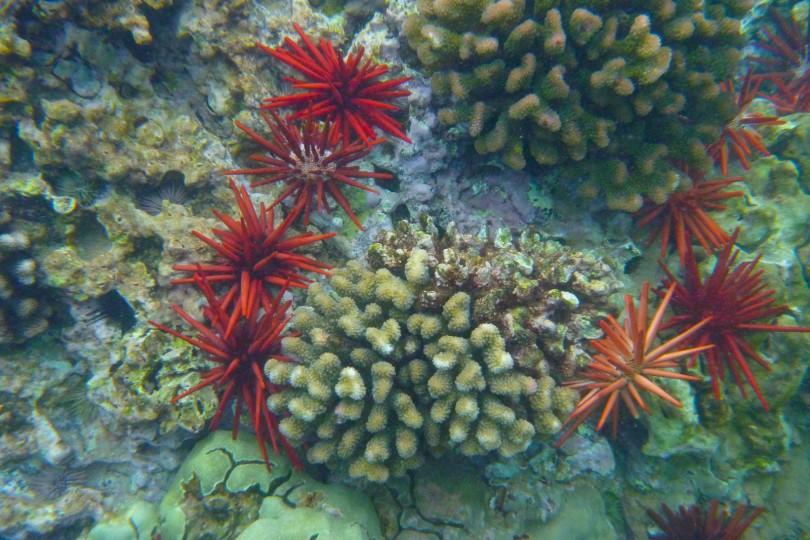 After a short break we decided to snorkel again and see if we would have nay luck finding turtles. There was a chartered boat not too far from the shore snorkeling so we figured they were swimming with turtles. We got about 3/4th’s of the way to the boat and then turned back. It was getting pretty deep and freaking me out some. Even though I could see the bottom I was still unsure. They have spotted tiger sharks here and the sharks eat these turtles so I decided not to take a chance. Once we turned back we spotted a turtle swimming right under us. So I was excited that we got to see one! 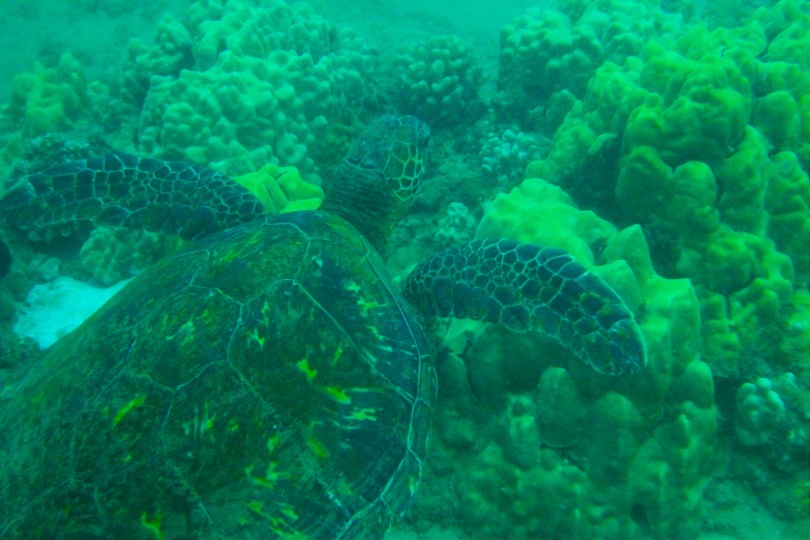 The turtle we saw and swim with in "Turtle Town"

Once we got done with “turtle town” we had lunch at a road side restaurant called Makena grill. I was a little apprehensive about this place and we almost turned around but I decided why not. I am so glad we stopped! This was one of the best meals we have had so far. Brandon got the teryiaki steak basket and I got the chicken basket. The basket had meat, steamed rice and local fruit sprinkled with a powder called Li Hing Mui. We didn’t know what this powder was so we asked then stopped at the local grocery store and bought some. It gives the fruit a little punch and is very tasty! 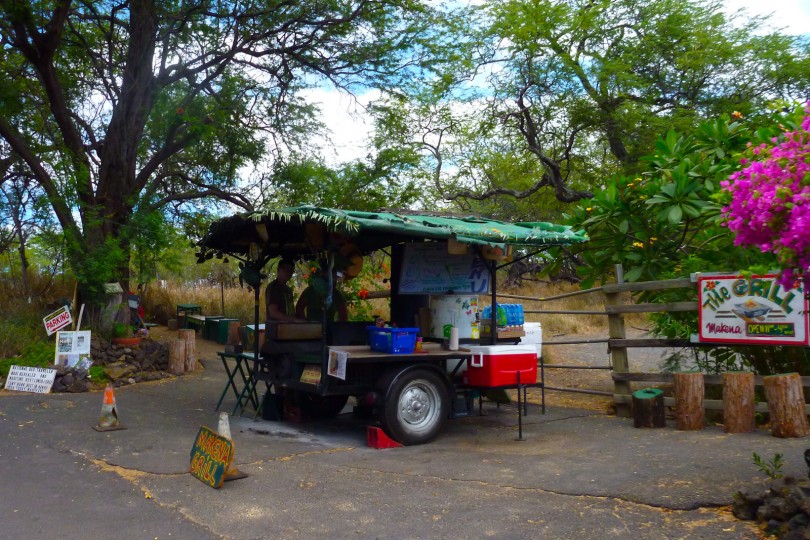 Some of the best food we had in Maui!

We then went to what is the premier resort area, splendid color and phenomenal beaches, Wailea. We parked next to the Grand Wailea which we were told is the nicest hotel on the island. Brandon and I swam and laid out on the beach here and it was quite beautiful! I even body surfed some on the big waves. 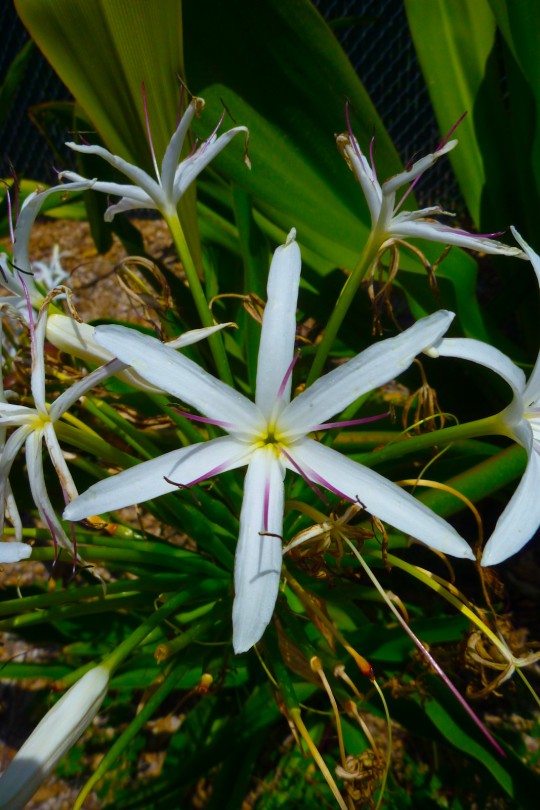 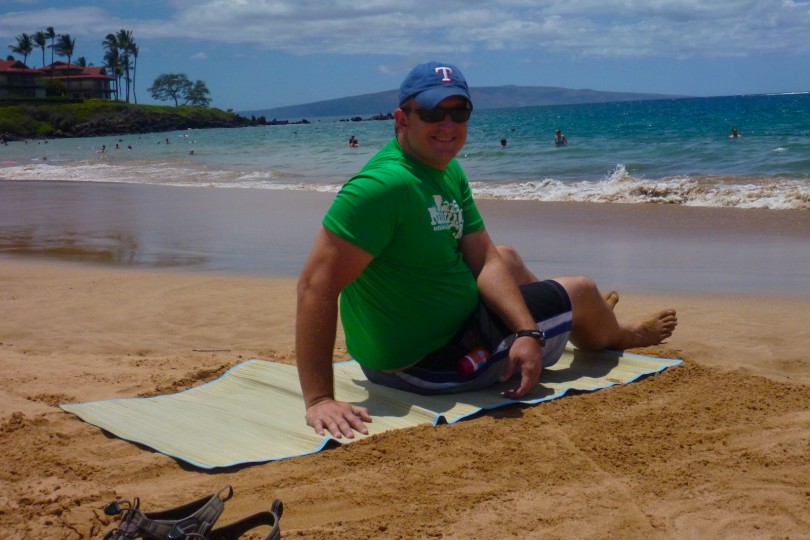 Hanging out in Wailea. 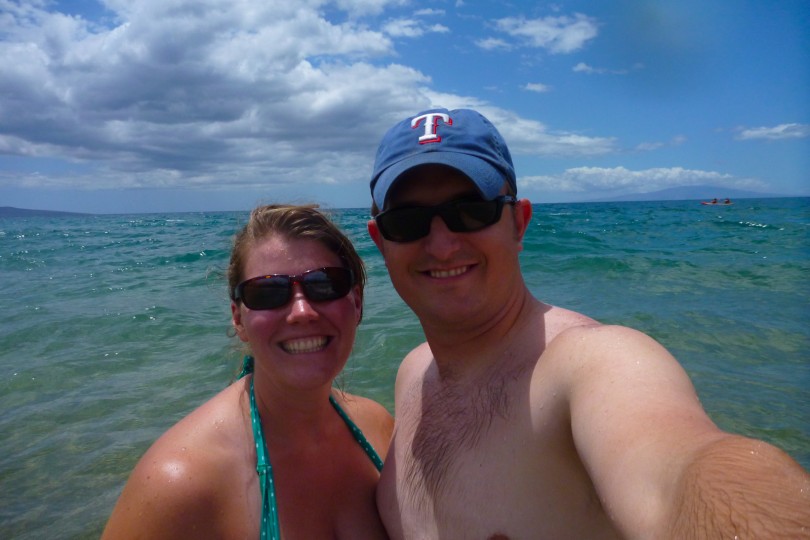 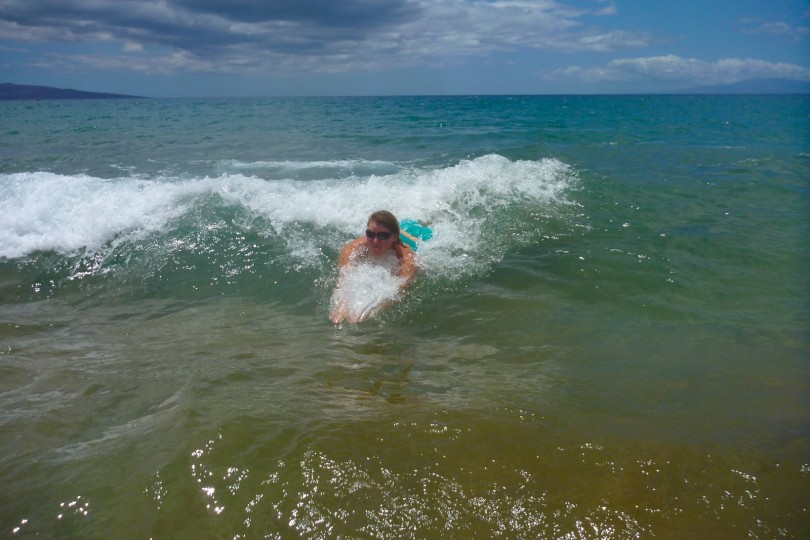 Body surfing in Wailea. Some of these waves got pretty big!

We decided to head back to our hotel and Brandon wanted to do some more snorkeling. He snorkeled out at black rock and I laid out by the pool while he did that for 45 minutes. He got to see another sea turtle again, which is always fun, especially when they are right outside your hotel. 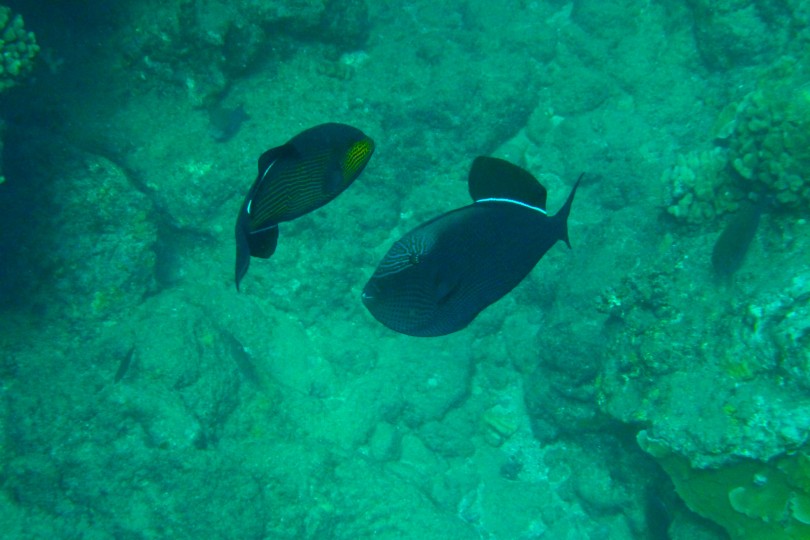 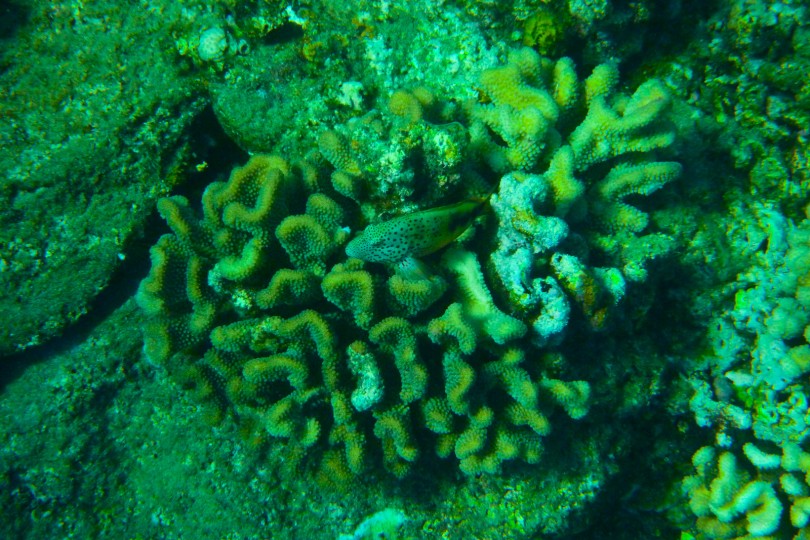 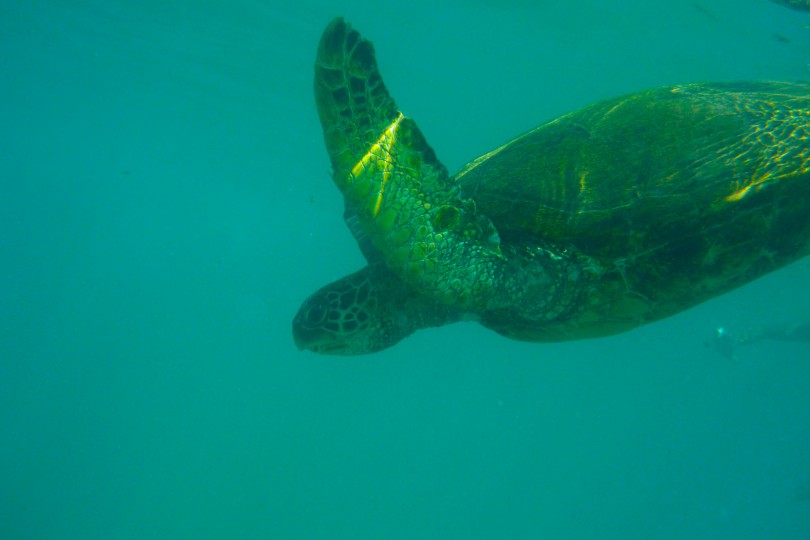 After that we cleaned up and went back to Lahaina for dinner. We walked around some and then ate at Cool Cats. They had a 50’s feel and the food was great! Throw your diet out the door when you go to this restaurant, its totally worth it though! We started with a basket of onion rings which were very delicious. Brandon ordered the Duke burger, which was a burger with BBQ sauce, bacon and onion rings. I had the Luna burger, which had avocado, bacon and cheese. We also had fires along with our burgers. Our food here was very good, but after wards we were both very full! 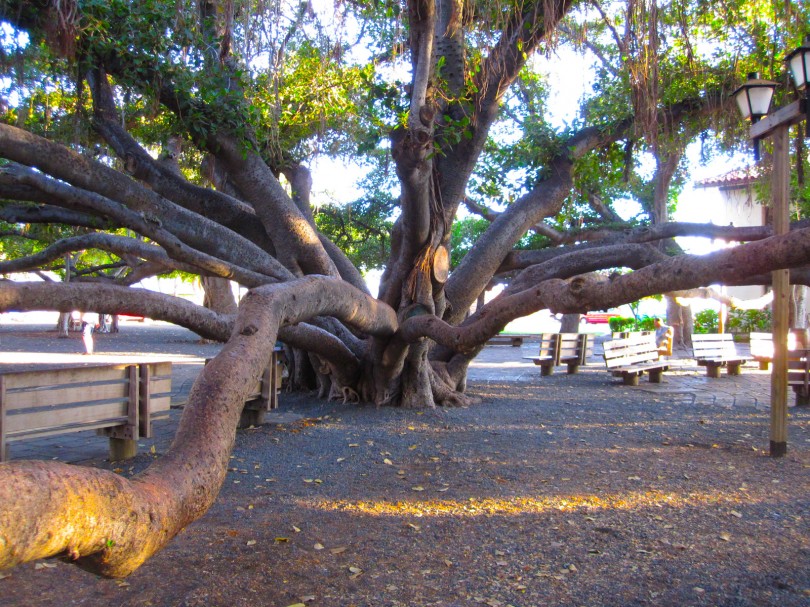 This is a Banyan Tree and was first planted in April, 1873. It marked the 50th Anniversary of Christian missionary work in Lahaina. The tree was imported from India was only 8 feet tall. It now stands over 60 feet high, has 12 major trunks in addition to a huge core. It now stretches over a 200-foot area. 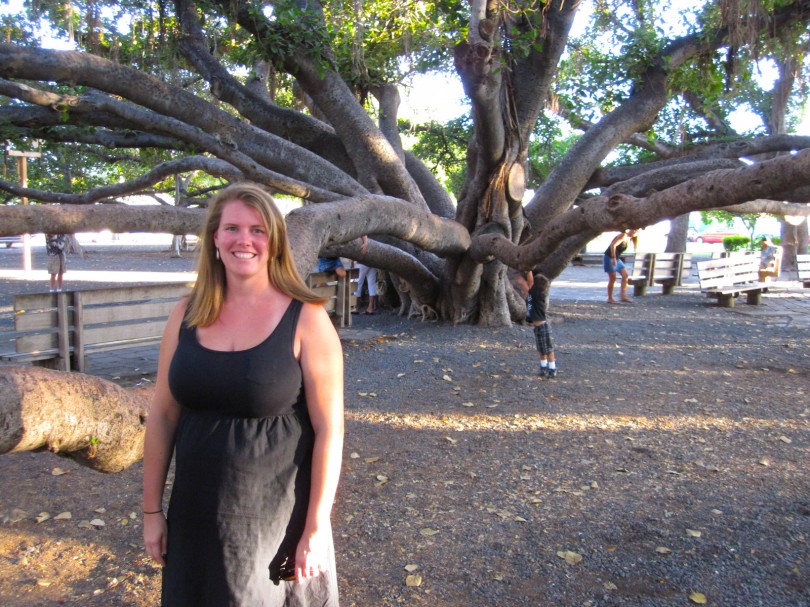 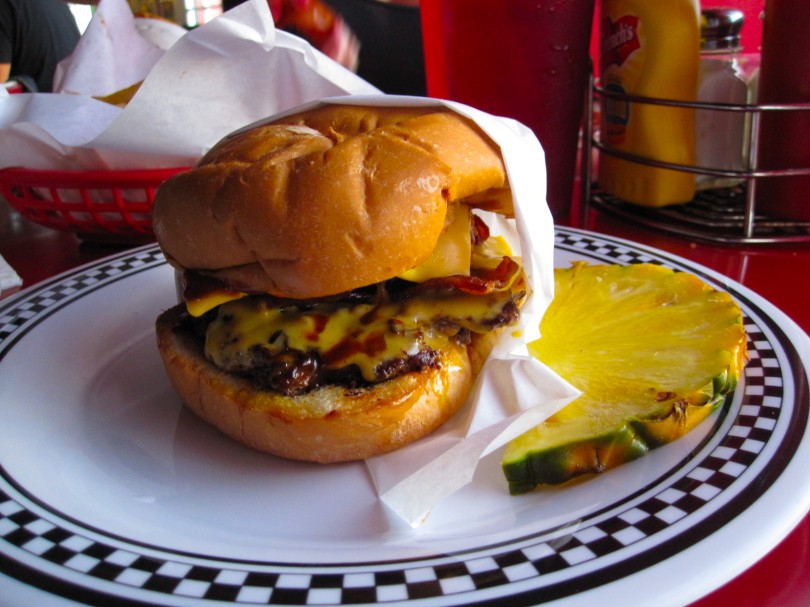 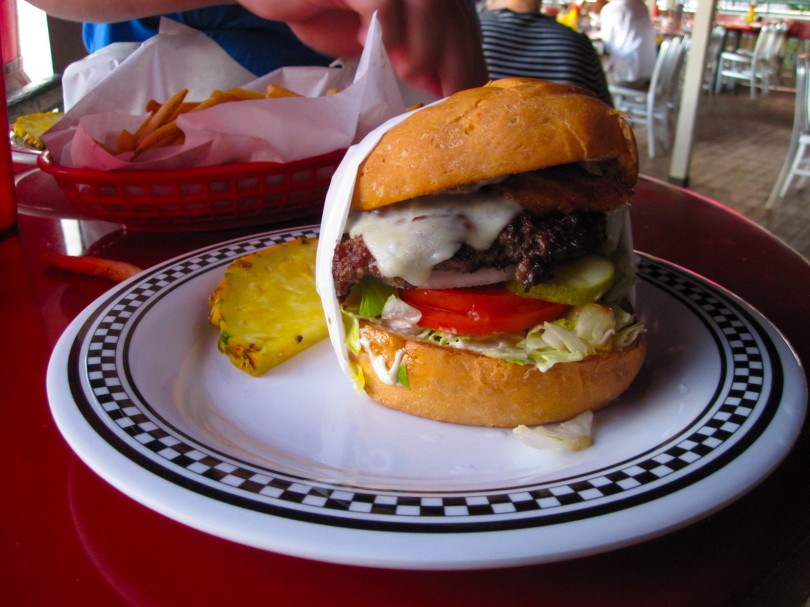 My Luna Burger! It was delicious, but messy!

What a wonderful trip…can’t wait to go myself. Great photos too!

i am glad you stopped too! aloha 🙂