Well, lately around our house there hasn’t been much activity going on. Brandon ended up coming down with the flu on Saturday so he was instructed to stay away from us and sleep on the couch. I couldn’t help but break down thinking about him not being in the delivery room with me when I had Luke. Fortunately I have a wonderful mother and amazing friends who were so very helpful to me and my family. I also have an amazing God who I know has a master plan and has everything in control! All I could do is turn to Him and pray for his healing and strength!

Monday morning came around and I woke up with a cough and congestion. I called my doctor just to be safe and she prescribed me Tamiflu just as a preventative. I am not too keen on taking medication while I am pregnant, but I also know she wouldn’t put me on something that would harm Luke. Well, being the stubborn self I am, I went to care united just to see if I did have the flu or not. The flu test was awful! They shove a small q-tip up your nose, literally into your brain to test for this. I immediately started crying and then got my first ever nose bleed. The test came back negative so I then asked do I have to take Tamiflu. She said no unless my symptoms got worse.

Tuesday morning, I woke up and my cough was a little worse than the day before so I decided what the heck I will just take this Tamiflu in hopes it would knock out my sinus issues. I took it with some breakfast, got to work and then started feeling nauseous! I then was throwing up every 30 minutes. I could not keep anything down. Crackers, water, Nothing! I felt like I was dying! I called the doctor and of course no one would be in the office till 1:30pm that day. I decided to go home, drank a glass of sprite and managed to fall asleep. This was helpful and I was able to keep the sprite down! I went to the doctor and of course they said do not take Tamiflu anymore. They wanted to test me for the flu, not knowing I went to care united and so when I confessed they said ok, we won’t do that to you again. She gave me a z-pack and said everything would go as planned for Friday unless I had a fever or productive cough. I hadn’t had a fever yet so I just continued to pray for Brandon and I to be fever free!

Wednesday: I am now just on a z pack and feel a lot better. I am still congested, sneezing, runny nose and cough every once in awhile. I also took Tylenol to help with the headache which again I hate doing but at this point I just want to feel some what normal for delivery on Friday and to meet our sweet new little addition to our family, Luke! I did call my doctor today but not for me, for Brandon. He has been on the couch since Saturday and away from us as much as he can. This has been so hard on Brooke. She told him she wanted to give him a hug to make him feel better. He had to say no and it just broke her little heart. She loves her daddy so much, so to not be able to touch him, hug him, kiss him or be around him was so hard. I told her that daddy had germs and was sick. That we had to stay away from Daddy until he got to feeling better. Well, my doctor said Brandon was clear to be around us after 4-5 days of the diagnosis and 48 hours of being fever free. Both happened yesterday so when Brooke and I got home she finally got to hug and kiss her daddy on the cheek. She held his hand every where he went and was so thrilled that daddy got rid of his germs. Brandon was also so excited that tonight he would be able to sleep in a bed and not on the couch. I sure did miss him in our room too but am thankful Brooke or I didn’t catch the flu from him! Lysol defiantly became my friend this week!!!

I think by being cooped up in the house since Saturday, Brandon was getting a little stir crazy. So when Brooke and I got home he and Brooke went outside and rode bikes together. I of course grabbed the camera to take a few pictures. Brooke’s hair was crazy but she was fine with it. She cracks me up. After they got done riding bikes she wanted to clean her bike. She found a scrub in the garage and went to work on her bike. I think she was just so excited to be outside, playing and doing things with daddy again! 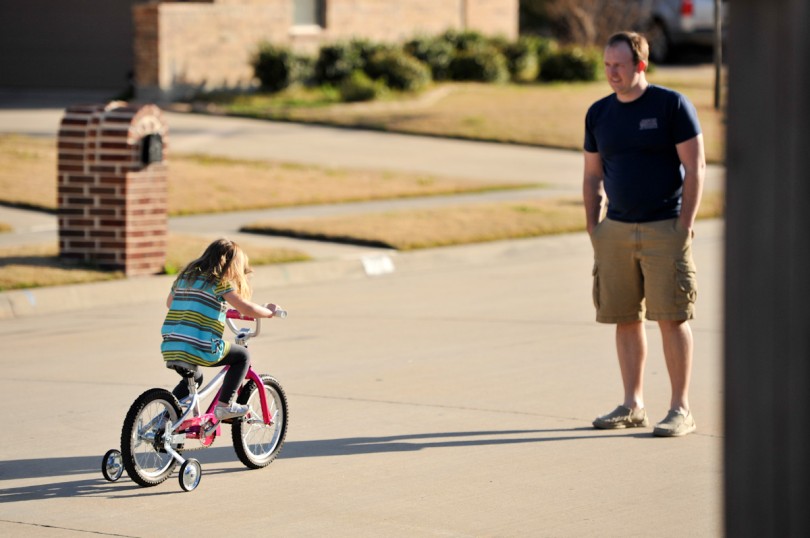 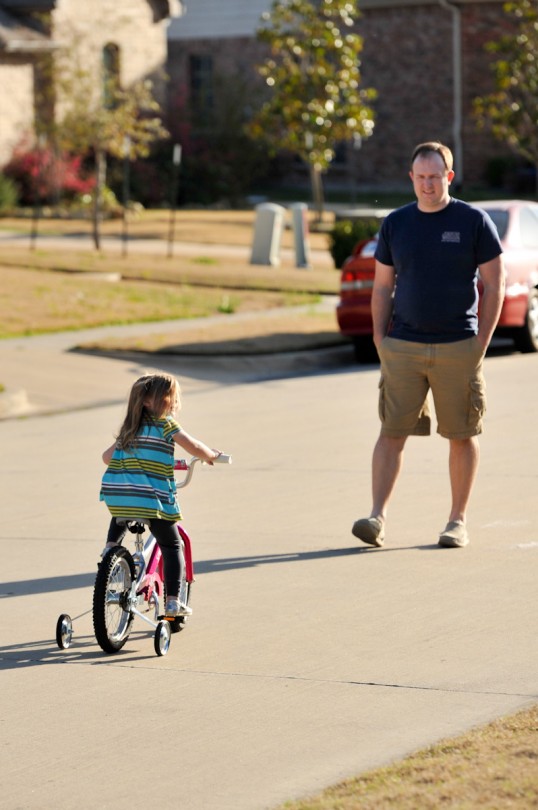 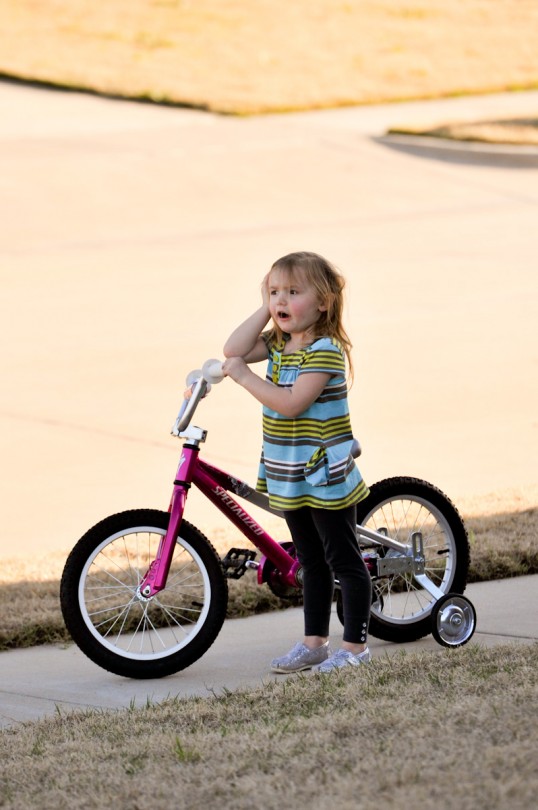 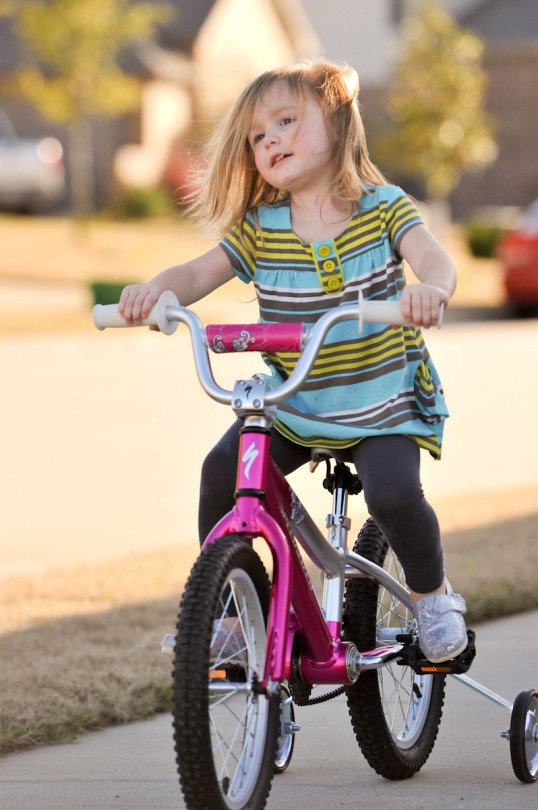 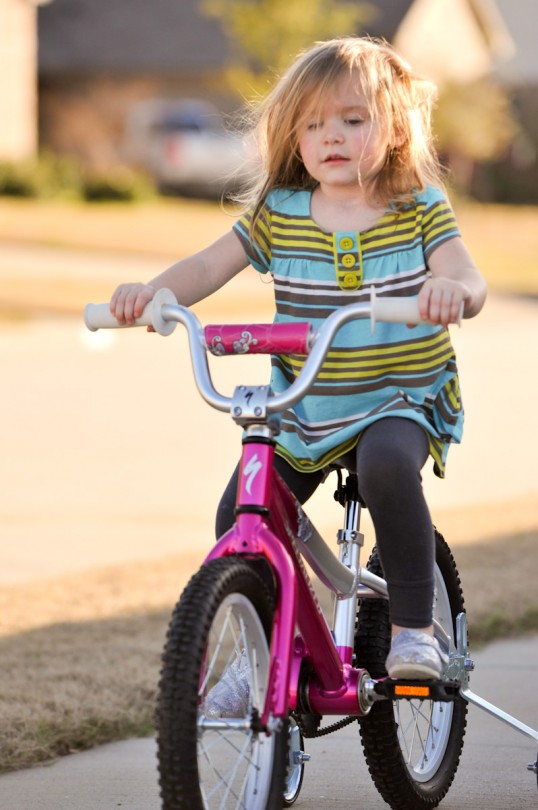 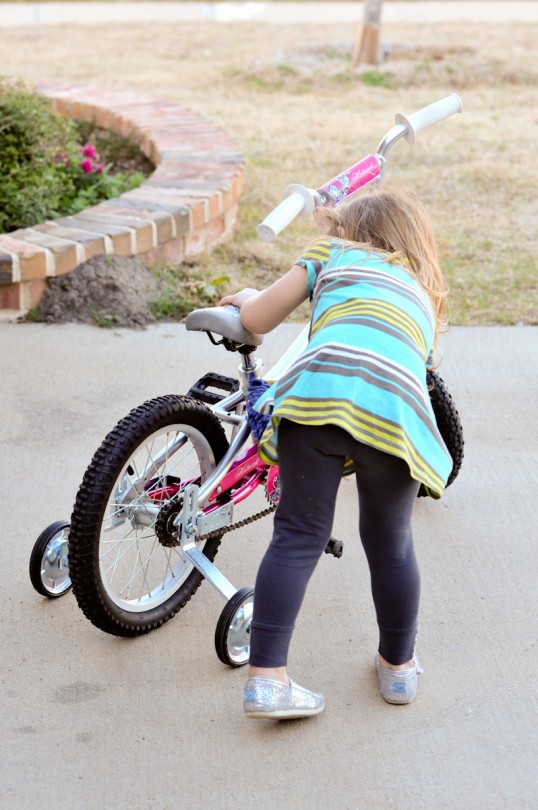 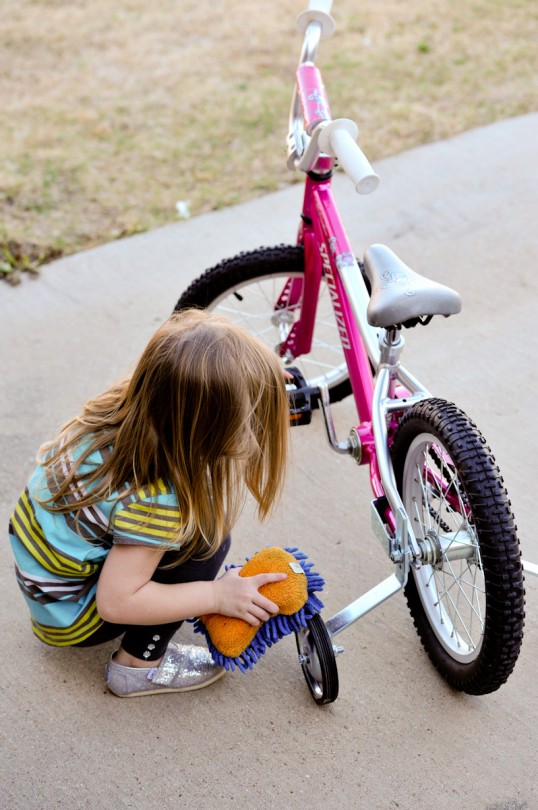