When Brandon picked Brooke up from my moms house on Tuesday, she told us that Brooke had thrown up early that morning and that she had been coughing. We got home Tuesday and everything seemed fine. She coughed here and there but nothing too bad. Everything changed when it was about time to go to bed. She was feeling a little warm and coughing more but was tired so she went to bed easy and fairly early.

Around 2am, I was still up because Luke decided to not go to sleep and be awake at night, I hear Brooke walking to our room. She crawled in our bed, began to cough again and so I told Brandon he may want to go get a bowl for her just in case she were to throw up. Not 10 seconds later there she was throwing up in our bed. Since I was sitting up in bed holding Luke I was able to catch the first vomit in my hand. Brandon then grabbed Brooke and she finished throwing up in the bathroom. He then brought me a towel, took Luke and then I cleaned Brooke up since her and I had throw up on us.

Brandon then had to go to Walmart because of course we had nothing in the medicine closet for Brooke’s fever or cough. Once he got back, Brooke got medicine, Luke got fed again and it was now around 3:30-4am. Luke finally went to sleep and then we were up for the day at 8am. It made for a long night but I wouldn’t change anything. Being a parent has it challenges but I know these challenges are small compared to others. We are truly blessed to have 2 wonderful children and each other as our spouse. Wednesday was a day of relaxation though since we were all pretty pooped. We watched several movies and chilled out on the couch pretty much the entire day.

Thursday, Brooke was still running a temperature so we took her to see the doctor. She did great at being weighed, 35.5 pounds, she is getting to be such a big girl! When her doctor came in, she told him right away, I have a fever and a cough. He checked her out and she did awesome. She has a virus that just has to run its course which is good to know but stinks that there really isn’t anything you can do to help her. Also, while we were there, we had Luke checked out. We were coming the next day for his 1 week check up so instead of coming back he told us that he would just look at him today. He weighed 8.6 and was doing great! 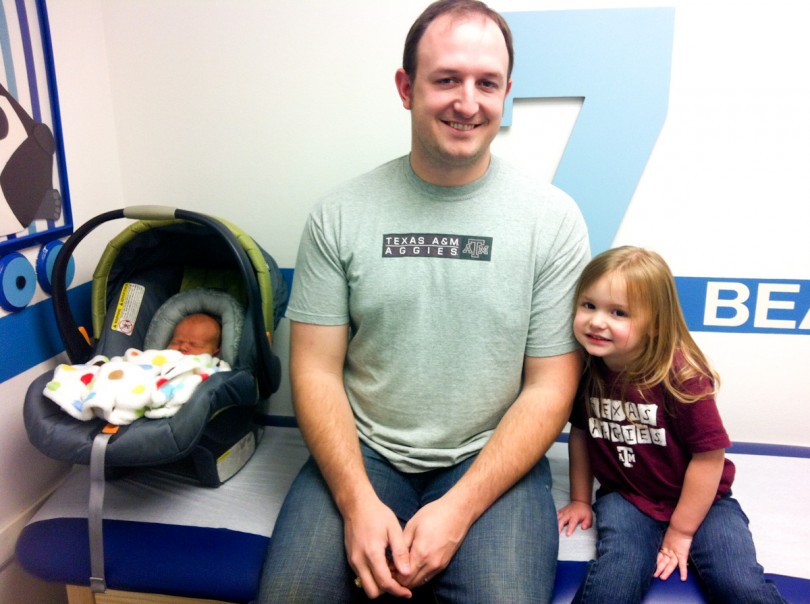 Poor Autumn! So sorry you’ve got so much going on. Hopefully it will all settle down soon.

I hope that Brooke is feeling better this week so we can do something for
Spring Break!! I miss having her one day a week!!
Love to you all –
Nana